The Cooperator has uncovered new evidence suggesting that the Liberal government was planning to locate the new high school in the Eastern Shore Industrial Park in East Chezzetcook at least as far back as the fall of 2015.

The Liberal government announced the selection of this site on February 2, 2021, but suddenly changed its mind after three applicants filed a Notice of Judicial Review challenging the legitimacy of the decision.

The evidence pointing to a secret decision with the Department of Education and Early Childhood Development and the then Department of Transportation and Infrastructure Renewal long before the beginning of the start of the official site selection process in 2019 consists of two maps, one from an email exchange in 2018, and one from a Community Campus Vision Association (CCVA) Power Point presentation in 2015.

MLA Kevin Murphy first called for the creation of a “campus” in the Eastern Shore Industrial Park in a controversial presentation to the Musquodoboit Harbour and Area Community Association AGM on June 8, 2014. He called for moving the high school, the Birches, and the rink to the industrial park. Jean McKenna, who served as Murphy’s official agent in his 2013 campaign, has led CCVA since its inception in 2015. 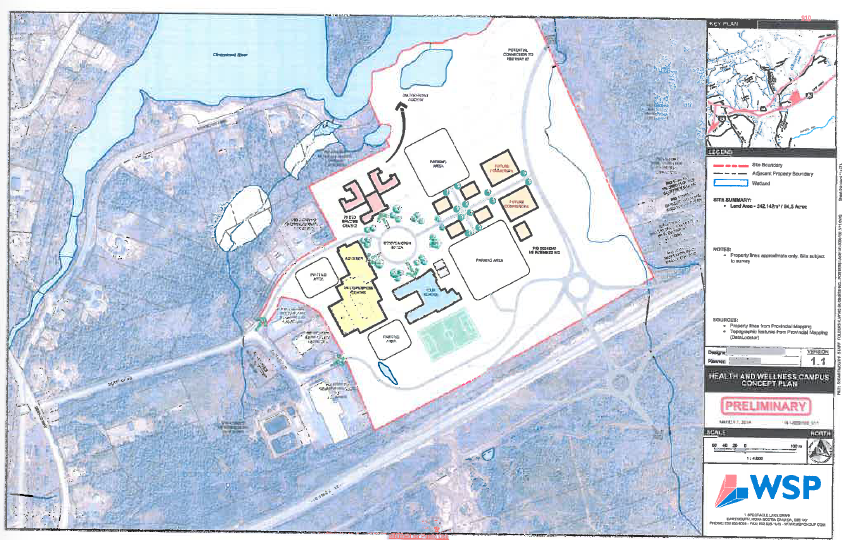 [WSP map of "Health and Wellness Campus. Note the new 4-way interchange just to the eeast of the "campus."]

The first map showed up in a FOIPOP (2019-08873-TIR) in an exchange of emails that took place on May 24, 2018. A little more than three weeks earlier, then-Education Minister Zach Churchill had announced on April 30, 2018 that the province would replace Eastern Shore District High.

The email exchange on May 24, 2018 consisted of an email from Phillip E. Cox with Efficiency Nova Scotia to Darrell MacDonald, and a reply to Cox from MacDonald. MacDonald was (and continues to be) Director, Education Facilities Project Services, Department of Transportation & Infrastructure Renewal, the TIR official in charge of school site evaluations.

In his email, Cox wrote, “Site planning already done for this one!”, with a map attached labeled, “Health Wellness Campus WSP.pdf: Eastern Shore District High School.” The map was done by WSP, one of the province’s largest consulting firms. On its website on March 19, 2021,  WSP describes itself as “a globally-recognized professional services firm employing approximately 49,000 people.”

The map shows the locations of a number of buildings on a site at the Eastern Shore Industrial Park, exactly the kind of “campus” that MLA Kevin Murphy first unveiled in the summer of 2014. Some words are blacked out. And because this map has been copied many times before being copied for the FOIPOP, not all of the words describing the buildings or on the legend are legible. This map also features an entirely new four-way interchange on Highway 107, a feature that would add significantly to the cost of the project.

MacDonald quickly replied to Cox, writing, “Yup. I had some info on all of this from a couple of years ago.”

A number of items on the WSP map are blanked out, so it is not possible to identify the date or the client.

In a recent phone interview with the Cooperator, MacDonald confirmed that he remembered seeing the map in 2018. “I didn’t commission that map,” MacDonald said, “and I don’t know who did.” He didn’t remember when he first heard talk about locating the school in the industrial park. “There were rumors of it,” MacDonald said, “we just kept hearing little pieces.” (Cox died several weeks after this May 24, 2018 email exchange.)

The Cooperator emailed MLA Kevin Murphy on February 25, 2021 with a series of questions about what knowledge he might have about the origins of the WSP map or any other planning that EECD had done on placing the new high school in the industrial park before April 30, 2018. (See below for a full list of the questions)

Murphy replied on February 26, 2021, writing, “I’ll get back to you.” The Cooperator has sent follow-up email, but Murphy has yet to reply. 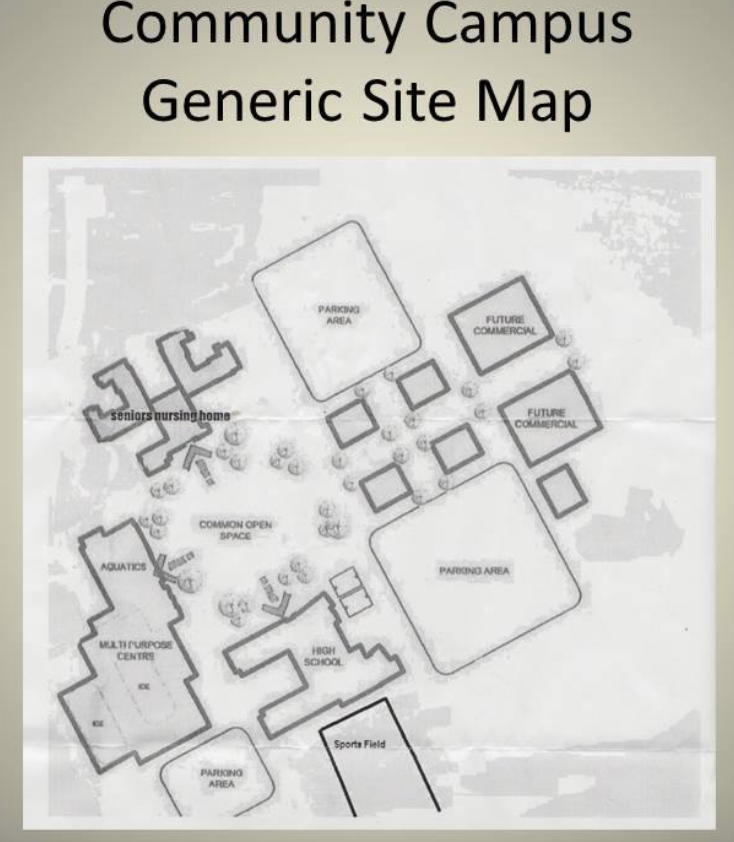 However, we now know that the portion of the 2018 WSP map showing the location of the high school and other buildings existed as early as October 28, 2015.

Several weeks after reviewing the 2018 map, the Cooperator reviewed a Power Point slide show that CCVA showed at a public meeting on October 28, 2015. One of the slides is an almost completely exact copy of the “campus” portion of the 2018 WSP map, clear enough to read the labels on all of the buildings: “seniors nursing home, aquatics, multipurpose centre, high school, and two future commercial sites.” Both maps use the same clip art to show the trees surrounding the common area in the centre of the "campus."

There are a few small differences. The 2015 CCVA map shows a "sports field" immediately below the high school, while the 2018 WSP map shows an unlabeled sports field in the same location. On the 2015 CCVA map, the label for the "seniors nursing home" is printed on top of the building symbol, while on the 2018 WSP map, the same words appear just below the building symbol.

We emailed CCVA head Jean McKenna to ask if she knew where she got this map. In an email on March 16, 2021,  McKenna wrote, “no idea Mr. Bell, there were tons of these floating around, Claudia Chender [NDP MLA] had one in the house, saying that the site was a done deal, I gather that is what you are trying to say.” [sic]

The Cooperator has reached out to WSP for more information about the 2018 map.

If, as McKenna wrote in her March 16, 2021 email, “there were tons of these floating around,” it is possible that someone other than WSP created this map some time before its appearance in the CCVA slide show on October 28, 2015.

So at this stage, we do not know who commissioned or produced the 2015 CCVA map that then showed up as part of WSP’s 2018 map. On the one hand, WSP may have produced the 2015 map, and then incorporated it into 2018 map. On the other hand, it is also possible that WSP might have picked up the 2015 CCVA map from someone else and presented it as part of WSP’s 2018 map; if so, WSP may have credited the source on its 2018 map, but the blackouts and the blurred type on the 2018 WSP map makes it impossible to determine if there is any such crediting statement.

The Cooperator’s investigation of the origins of this map, and the determination of when EECD and TIR began to plan to put the new school in the Eastern Shore Industrial Park, continues. If you have any information that you believe bears on this investigation, please email the Cooperator at [email protected].

Thanks for your help in providing whatever information you may have about the following five questions:

Did you play any role in the commissioning of WSP to prepare this drawing?

If you had no role in the commissioning of the WSP drawing, have you ever seen this drawing, and if so, when did you first see it?

Do you know who did order WSP to produce this drawing, and the date when WSP completed this drawing?

Before you announced in 2014 your proposal to move the high school, the Birches and the rink to the industrial park, had you had discussions with, or were you aware that, anyone in the provincial government had already begun planning the development of the site in the industrial park for the school?

The existence of the WSP drawing shows that other site planning activities were well underway by May 24, 2018. After your 2014 proposal announcement, did you become aware at any time before the conclusion of the site selection process that provincial officials in Education, TIR, or any other provincial department were actively engaged in planning the development of the site in the industrial park for the school?