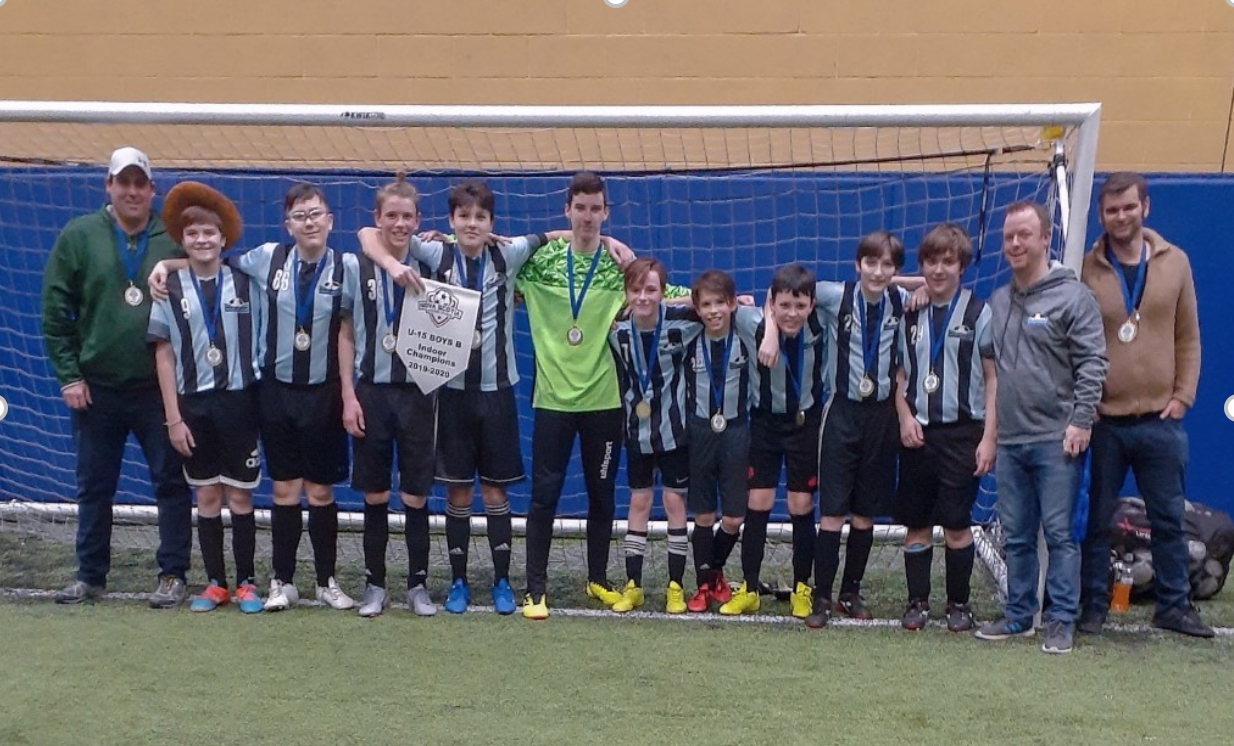 The U15-B Boys of the Porters Lake Soccer Association won this winter’s U15-B Winter Indoor Championship at the BMO Soccer Center in Halifax over the weekend of March 7/8. Their surprising win came after just squeaking into the playoffs on the last game of the regular season East Hants), and winning their semi-final match on a “sudden death” shoot-out (Suburban FC).

When the semi-final game ended in a 3-3 tie, PL Coach Chris Branton gave the nod to veteran goalkeeper Jake MacMillan for the shoot-out.  MacMillan had been solid in nets all weekend and a scoring threat when playing out. Suburban’s first shot went wide, giving PL the opportunity to win the game.  From the penalty spot, MacMillan blasted one to the left back corner! Porters Lake won 4-3 and advanced to the championship game on Sunday.

And they did not disappoint! The final game saw Porters Lake upset first place United Dartmouth FC in a 2-1 victory to claim the U15-B Indoor League Championship.

The U15-B Girls team also made the playoffs by finishing in the top three. The team worked hard all season to defend last year’s title and finished the regular season in second place behind Halifax County United.  They faced a stubborn Dartmouth Storm team in the semi-final and lost 3-1.  Storm went on to defeat HCU in the championship game 4 -1.

For some PLSA players, soccer is a year-round sport.  The winter indoor game is a smaller, faster version of the outdoor game.  Played on artificial turf with only 7 players aside regardless of age/division, fewer rules (no offside) and the ability to substitute players “on the fly,” many players find the indoor game more exciting, challenging, and competitive.

This winter, PLSA registered three Youth teams in the NSSL Indoor League – U10 Skills Center (coed), U15-B boys and U15-B girls.  The teams train locally in school gyms and on the indoor turf in Dartmouth. 16 weeks of league games are held from October to March, played mainly at the BMO Soccer Center in Halifax.

In light of the public health response to COVID-19, PLSA is working with Soccer NS to plan for the return of programs when it is safe to do so.  PLSA has cancelled all spring training programs but will soon open registration for the Summer 2020 season.   Typically, youth teams begin to train in May and Timbits Mini Soccer programs begin in June.  Follow PLSA (Note: Jacqueline Sanford is the newly elected president of the PSLA Board.)