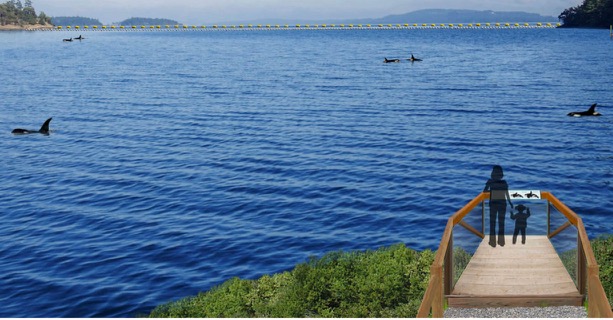 On February 25, the Whale Sanctuary Project announced the selection of Port Hilford near Sherbrooke as the site for North America’s first sanctuary for captive beluga whales. (Click here for the Cooperator’s announcement article. )

The videos below are from the announcement press conference. Charles Vinick, executive director, and President Dr. Lori Marino made the announcement at the Maritime Museum. After an introductory film, they talked about why they selected the site, and took questions from the press. Dr. Stephen Flemming, Executive Director of Sherbrooke Village, Minister Lloyd Hine, Sue Henry from Sheet Harbour also spoke.

[For additional articles on the background, you can search the Cooperator website by clicking on the little magnifying glass on the upper right side on any web page, and entering “beluga” or “Vinick.”]]

Charles Vinick, executive director of The Whale Sanctuary Project, introduces a 5-minute film about the origins of the project, and the Project’s dedication to finding a way to get these intelligent mammals out of the holding tanks that almost literally drive them crazy.

Charles Vinick announces that they have chosen Port Hilford/Sherbrooke as the location for the first North American captive whale sanctuary ever. Dr. Lori Marino, president of the WSP, talks about how she and others working in marine mammal sciences, came together in 2016 to found the WSP because they wanted to create “a new way of living with other animals.” She then turns the floor back to Vinick, who talks about site selection, visiting 30 sites, and driving along the 7000km of Nova Scotia coast. They were looking for “a community that embraces our vision and expands our vision and will work with us hand in hand to create a sanctuary.” Port Hilford/Sherbrooke turned out to be that place

Dr. Stephen Flemming, Executive Director of Sherbrooke Village, spoke about the importance of community support in welcoming “this outstanding project,” recognizing “the special value of this sanctuary to the whole world.” He said that Nova Scotians liked to support “the underdog, or in this case, the under-cetacean.” He made a special point of offering thanks to “the people who are most affected…the fishers of Port Hilford who’ve been so supportive of this thing.” He thanked several of these families by name, calling them “the core of what we needed to do.”

In this section, Vinick answers questions from the press.

1.How’s it going to work? They’re just beginning to answer this question for this site, which will be about 40 hectares, or 100 acres, of water, about 300 times the space in the largest tanks. The belugas have never caught live fish, so the Project will continue to provide frozen fish, plus all the onshore infrastructure for staff, animal care, etc. Vinick: “ How that will look, what ingredients will be,..are all the steps that we now have the privilege of engaging in with the community, with Sherbrooke, with the fishers, and with First Nations.”

2. How long will this whole process take? Vinick: “About one and a half hours.” (laughter from the audience). “Our objective is to welcome the first animals into this sanctuary before the end of 2021. That’s a stretch goal, but if you don’t have a stretch goal, that you desperately want to achieve, you never get there.”

3. How many whales: 5 to 8 belugas, depending on the results of detailed study of the area.

4. Just belugas? There are some 3000 whales and dolphins in captivity around the world. Orcas and belugas suffer more than any other marine mammals in parks. The site will be designed to relate to belugas, without completely ruling out an orca if one became available.

More questions, and a statement of support from Sue Henry in Sheet Harbour. Vinick talks about the importance of listening to and respecting all the stakeholders in a community.

Dr. Marino: Create a model sanctuary, a model for others to follow. We’re going to do this right and transparently so others can create similar facilities around the world

Question: What was it that made the communities around Sherbrooke so open to this project, while there were threats of physical violence from people in other potential sites?

Vinick: "We got tremendous response virtually everywhere we went along the South Shore and the Eastern Shore…. Everything about this decision is about what is best for the whales.

“In Sheet Harbour, we probably had 9-10 community meetings, 200-300 people showing up for meetings, and the overwhelming response there was positive, just as it was positive in Sherbrooke.

“People react differently to these kinds of opportunities, but some of their concerns are real, and we will have the need to continue this kind of interaction with all stakeholder groups going forward to find the way to do our project that enhance the way they use the water, that interfere and limit their use of the water as minimally as possible and certainly that’s the process going forward.”

“We are just elated that this is going to take place in NS and CA. No matter where on the Eastern Sore it will take place, we will be there to support it, and we will be side by side with Sherbrooke. They’ve already extended an invitation to us, which we have gratefully accepted. So good on this project, we’re going to do it.”

[The illustration is a drawing of the sanctuary concept from The Whale Sanctuary Project website.]