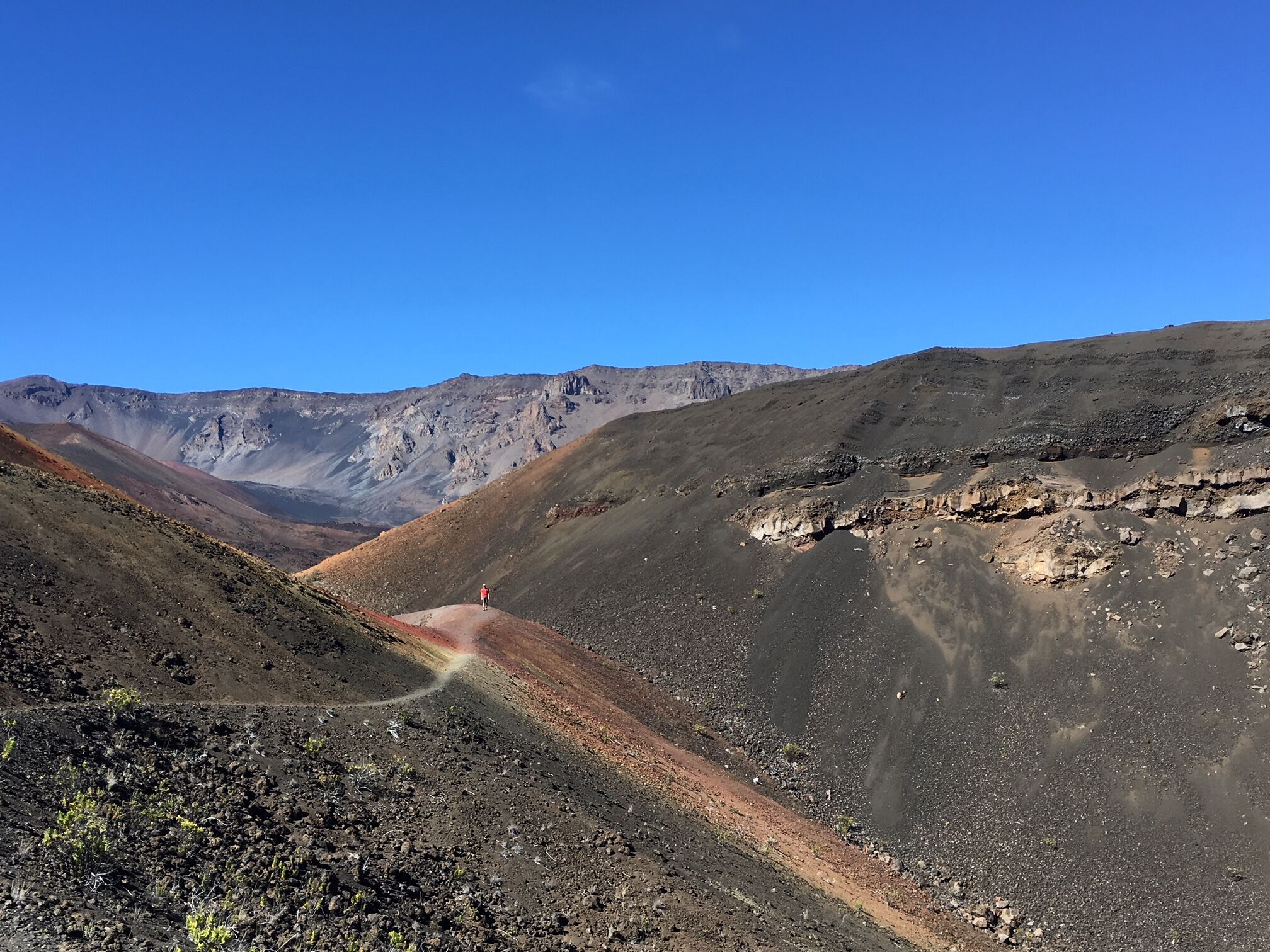 Volcanoes and Silverswords: Hiking on Maui

If you're going to Maui, the guidebooks will probably tell you to book a reservation up to 60 days in advance at recreation.gov to watch the sunrise in the Haleakela crater. I would bet that they are right. It’s probably one of the most beautiful places to watch the sunrise in the entire world. But because we are not great planners, my boyfriend and I did not do that.

We decided to do an eleven-mile hike instead called the Halemau’u or Sliding Sands and Switchbacks Trail, which drops you down into the crater on one side and then brings you back up a few miles down the road. We watched the sunrise from whatever ill-placed pull outs we could find on the volcanic hillsides, parked our car at the end of the trail, and hitched a ride to the summit with a couple from Florida who drove us the rest of the way to the summit.

The trail starts as light zigzags down the crater wall. This part of the crater is part of the Aeolian zone: the barren, rocky environment seems too inhospitable to host life, until suddenly, it does. As we descended into the crater, plants started to pop up among the black rock. They looked almost exactly like buffalo grass, or small yucca plants, except that they are completely silver. According to the brochure we picked up at the visitor's center, these plants are called silverswords and used to cover the hills in shimmering silver until they faced the fate of many beautiful native plants and were overeaten by goats.

Once on the crater floor, we passed by several volcanic cones, the remnants of former eruptions now worn away into low, inviting black hills. Further on, the black volcanic rock gave way to a dusty, coppery red, while looming in the distance was a mountain striped with greens and yellows.

About midway through the hike, we crested a red hill and suddenly were transported into a field of heathery green shrubs, held in by the almost-sheer wall of the crater rising up on our left and the ocean straight ahead. We walked through the field and ate our lunch at a small cabin nestled into the base of the wall and maintained by the Park Service (sleeps twelve and is available to rent for only $75 a night). Its existence seemed unlikely both within the wilds of the volcano and the barebones world of national parks funding these days.

The clouds had rolled in from the ocean, so for the last leg of the journey, we could no longer see the dreaded switchbacks, the ocean, the hills, the crater, or the hillside. As we walked out of the crater, the clouds filled up the void, clearing only intermittently to give us a view of the crater floor that we were leaving behind. We reached our car and promised ourselves that next time, we would plan ahead and see the sunrise, too.