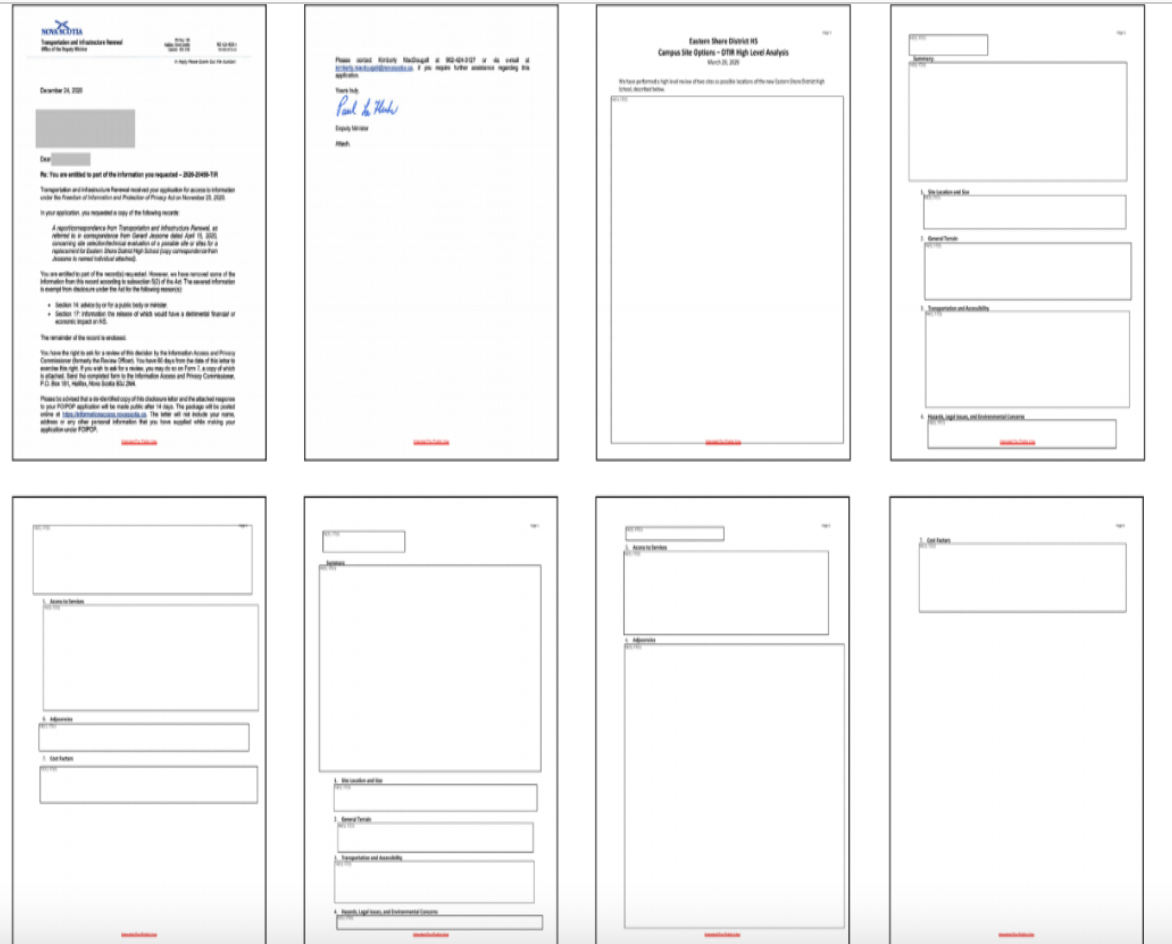 What Happened to Transparency?

[Editor’s Note: The Liberals’ commitment to secretive decision-making played a role in their electoral loss. In the PC’s successful campaign, Premier Tim Houston made a commitment to transparency one of his core campaign themes.

We were therefore disappointed when the Houston administration decided in December 2021, to continue supporting the secrecy surrounding the Liberals’ decision to build a new junior/senior high school in the Eastern Shore Industrial Park.

The Liberals’ school decision-making left many unanswered questions which the Cooperator continues to investigate. The previous premier promised a government of transparency when the Liberals won in 2013, but McNeil abandoned his promise once he was in office. The new premier promised to do better.]

Politicians like to claim they’re champions of transparency, until they must deal with actual requests for documents. Nova Scotia’s Freedom of Information and Protection of Privacy Act (FOIPOP) is a toothless law because the Information and Privacy Commissioner cannot force the government to release information.

In his first campaign to become Premier in 2013, Stephen McNeil promised to give the Commissioner order-making power to correct this fatal weakness. But once in office, McNeil changed his mind, leaving government with the power to ignore the findings of the Commissioner.

The new Premier, Tim Houston, has always presented himself as a staunch advocate of transparency in government and a strong critic of the Liberals’ secrecy. In his campaign for Premier, he promised to strengthen the FOIPOP Act by giving the Commissioner order-making power to compel the government to release FOIPOPed documents.

But when presented with an opportunity to reverse one of the McNeil administration’s critical FOIPOP decisions, the Houston administration failed to act in the interest of transparency.

The PCs’ failure to uphold transparency grew out of the bitter dispute over the Liberal’s 2021 decision to replace both Eastern Shore District High School in Musquodoboit Harbour, and Gaetz Brook Junior High in Gaetz Brook, with a combined junior/senior school to be built in a failed industrial park in East Chezzetcook. This decision involves the largest provincial expenditure in many decades on the Eastern Shore, an estimated $30 million or more, a decision that will affect the lives of these communities for at least the next 50 years.

During this fight, someone filed a FOIPOP asking for a copy of a critical document, a March 2020 technical report by the then Transportation and Infrastructure Renewal Department.

I emailed a series of questions to Premier Houston asking why DPW was not observing his commitment to greater transparency. I spoke several times with his press secretary, Catherine Klimek. She told me that the Premier’s office itself was now reviewing the handling of FOIPOP 2021-01772-DPW. But on December 16, 2021, Klimek notified me that after an “all hands on deck” review, they had decided to redact the entire text of the document.

Both administrations invoked two very broad exemptions in the FOIPOP Act, 14(1) and 17(1), to justify redacting every single word in the text. But the law makes a critical distinction between “background information,” to which the public is entitled, and “advice, recommendations or draft regulations developed by or for a public body or a minister,” to which the public is not entitled.

Office of the Information and Privacy Commissioner Investigator Darren White provided a careful explanation of the distinction between “background information” and “advice” in a 10-page September 7, 2021, letter concerning an appeal of the denial of information in a FOIPOP about one of the McNeil administration’s other secretive actions, the delisting and offer to sell Owls Head Provincial Park.

According to White, the drafters of the exemption for “advice” in 14(1) “very clearly sought to protect the process by which decisions are reached within government, as confirmed by the Supreme Court.”

White offered a useful test for how to distinguish between “background information” and “advice.”

The drafters of Section 14 (2), White wrote, “also, and equally clearly, articulated that the background material (objective facts and history) underlying those decisions are not protected from disclosure. A significant part of citizens being able to hold their government to account per s. 2(a) is knowing what objective facts existed at the time a government made a decision. This is why the very next line in s. 14(2) says (emphasis mine): ‘The head of a public body shall not refuse pursuant to subsection (1) to disclose background information used by the public body.’” [These emphases are in White’s letter.]

There may very well have been material in the TIR technical report that qualifies as “advice.”

In his letter, White’s test is to ask whether a “reasonable” person would agree with the government’s claim that every single word in the text of this report was “advice.”

Here are the titles of the seven blank segments of the report: Site location and Size; General Terrain; Transportation and Accessibility; Hazards, Legal Issues, and Environmental Concerns; Access to Services; Adjacencies; and Cost Factors.

Both McNeil and Houston also invoked Section 17 (1) to justify redacting the entire text.

Here again, is it “reasonable” to assume that every single word in the seven sections poses a threat the economy? How could information about the “General Terrain” of a possible school site “reasonably be expected to harm” the province’s economy or the ability of the government to manage the economy?

By invoking sections 14(1) and 17(1), Houston’s administration has done exactly what White specifically warns against—that no administration should be “the sole determiner of what is important to the public and what is not. No part of the act indicates that this is the case.”

So unless the PCs pass a law giving the Information and Privacy Commissioner the power to force the government to release documents, as Premier Houston promised to do during his campaign, the current government (and all future governments) will remain “the sole determiner of what is important to the public and what is not.”

And the public will never know what is so damning in this document that both the previous Liberal government and the current PC government redacted every word in the document except the title, an opening sentence, and the segment titles.