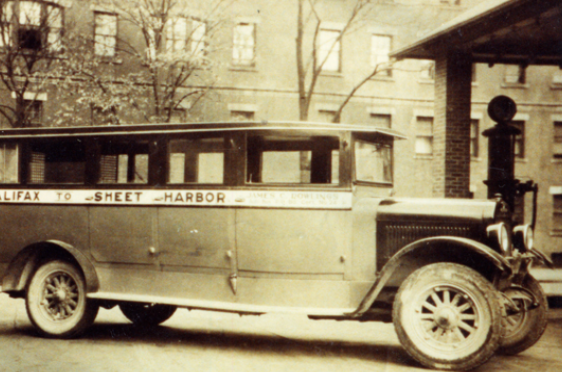 Where have all the buses gone, long time passing?

First my apologies to Peter, Paul and Mary “borrowing” their lyrics - “Where have all the flowers gone, long time passing” - but the album was titled “Magic Bus”!

When I moved to Clam Harbour in 1971, with my wife and three children, travel on the Eastern Shore was quite a bit different than it is today – many more gravel roads and far fewer vehicles.  Most vehicles tended to be “well used” and a brand new pickup truck was a rarity and a topic of much local discussion and speculation.

All of this meant that “going to town” was not as common and easy as it is now.  One of our older neighbours, even though he had a truck, had never ventured beyond the outskirts of Dartmouth, and certainly not across the bridge to Halifax!

But there was another big difference – the Eastern Shore Bus – which left Sherbrooke very early in the morning, picking up passengers along the way, as it headed for Halifax. Later the same day, in the late afternoon, it headed back to Sherbrooke – the same bus and the same driver.

In 1961 it is likely the route was taken over by the Zinck’s Bus Company and the bus thereafter became known as the “Zinck’s Bus”, even after the company was probably merged with the Perry Rand Group in 1980.

But with more and more people having their own vehicle, ridership declined, and in 1997 the Perry Rand Group applied to the Nova Scotia Utility and Review Board to discontinue the service. The Board initially refused but eventually accepted, and in 2005 the service ended, some sixty or so years after it started.

The Eastern Shore Bus was not the only bus serving the Eastern Shore.  There were a number of others that started from communities closer to the Halifax/Dartmouth than Sherbrooke. These include buses that ran from West Chezzetcook, Jeddore, and Sheet Harbour to Halifax at various times over the years. In addition, there were some taxi services.

Obviously, there are lots of blanks in the history of buses on the Eastern Shore. But I know there are still many memories, and it is these memories I would like to collect, especially from people who rode on one of these buses.

So, if you have any information you would like to share with me it would be really appreciated. This could include memories about the drivers, where the bus stopped, what did it cost, were there “regulars”, any funny sad or scary stories, basically any memories or stories that would help fill in the blanks. Also, if you have photos of any of the buses, or people waiting for a bus, or people on the bus, I can scan the photos and leave the original with the owner.

[Note: Gordon Hammond is a co-founder of Memory Lane Heritage Village. He has a long-standing interest in local history, and has documented the churches and many of the local barns on the Eastern Shore.]