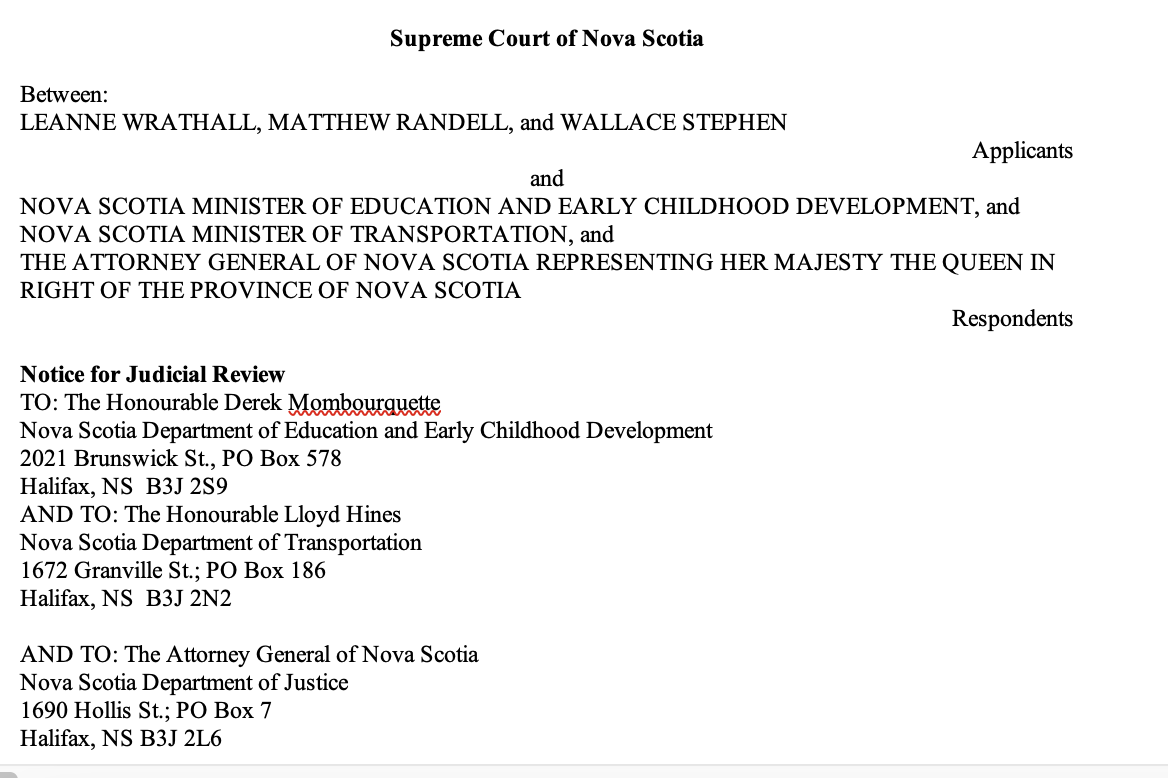 The applicants are asking for the court to send the decision back to the Minister of Education and Early Child Development and to the Minister of Transportation with instructions on how to redo their work in light of the deficiencies identified by the court.

In the Notice for Judicial Review, the three applicants raise a number of issues that the Cooperator reviewed in the March 2021 issue, starting with issues dealing with the Ministers breaching “procedural fairness.” The Minister of Transportation failed to provide the public with information about the site selection process or the proposed site in the Eastern Shore Industrial Park before making a recommendation to the Minister of Education, as required under EECD’s site selection rules. (See BACKGROUND--Churchill’s Elimination of Public Input to Site Selection.)

Breaching the Minister of Education and Early Childhood Development’s duty of procedural fairness also comes up because the Minister failed “to disclose a potential conflict of interest between the Member of the Legislative Assembly for the Eastern Shore Riding and an owner of lands adjacent to the industrial park at East Chezzetcook, thereby giving rise to a perception of bias in the decision-making process.”

Because the government has released almost no information about the entire site selection process, it is impossible to know how thoroughly officials at EECD and TIR examined any alternatives to the industrial park site.

However, there is some evidence that one or both Ministries had engaged in planning for the industrial park site before the announcement on April 30, 2018 that EECD would replace Eastern Shore District High.

In their supporting affidavits, the three applicants describe the negative effects of the industrial park decision-making process on their businesses and families. Leanne Wrathall has lived in Musquodoboit Harbour for roughly 30 years. She and her husband own several properties in the area, and have two children in public school, at least one of whom might go to the consolidated school. She includes concerns about negative impact on her children of losing access to the many resources in Musquodoboit Harbour, “such as the library, the rink, walking trails, convenience stores, restaurants, ball fields, community centre, a café, and a bakery.”

Wallace Stephen owns a one-third share of Musgo Convenience, which he helped launch in 2016. In his affidavit, he notes that he chose the location in part because it was in walking distance of the high school, and that moving the high school elsewhere would cost the store 15 to 20 percent of its income. He also objected to eventually having his now young grandchildren being sent to a school without the community resources available within Musquodoboit Harbour.