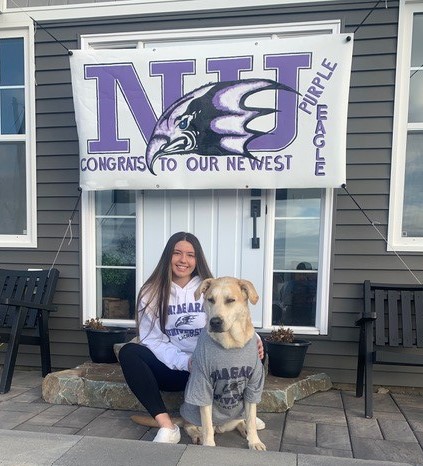 Hannah Kent Steps Up Her Game

Hannah Kent will be taking a major step forward in her lacrosse career in the fall of 2021, when the 17-year old joins Niagara University’s Purple Eagles women’s lacrosse team. Niagara offered Kent a scholarship to play in the U.S. National Collegiate Athletic Association’s top college division, and she is committed to the 2022 season.

Since 2017, Kent has been attending Kent Prep School in Connecticut on a lacrosse scholarship. In an interview with the Cooperator, Hannah Kent agreed the move in 2017 was a big change for someone from such a small town: “Being away from home was a challenge,” she said, “but I made a lot of new friends from around the globe, which was really fun. The school also had access to more modern technology there, which was helpful in my studies.”

Nova Scotia Lacrosse Director KJ MacNeil confirmed to the Cooperator that Hannah Kent is the first person ever from Nova Scotia to play Division 1 lacrosse. “That is something I'm pretty proud of,” Kent said, “to accomplish that from a small community.”

Kent Prep School had other advantages for a dedicated lacrosse player. “One of the biggest changes in my lacrosse training was the transition from indoor box lacrosse, which I played when I was young, to women’s field lacrosse,” Kent said. “It’s like a completely different game. The campus has a massive field. I fell in love with all the new space.”

Playing sports has been difficult for many in 2020 since. “COVID was definitely an unexpected change for us,” Kent said. “We managed to go home for March break, and then we were supposed to go to Florida for spring training, but that got cancelled. When the schools closed, I lost my entire season of lacrosse with the team as a Jr captain. It's hard to believe, but it’s been almost a year since I’ve played an actual lacrosse game, which is so rough.”

Luckily, Kent has found new areas to train herself in the meantime. “I have lacrosse equipment to practice with on my own at home, like my rebounder to bounce my hits off of, and I have my own all-weather turf. I’ve been working on little things where I can, individually. It’s an entirely different feeling, practicing alone, but I can’t wait to showcase all this work I’ve put in once we can finally come back together. Getting back into that game mindset is what I’m looking forward to the most.”

Hannah Kent has also started her own small business of mentoring youths interested in lacrosse called 902 Lax, the name reminiscent of her Eastern Shore home. “When I was younger, having sports stars to look up to were big sources of motivation for me. I want to give back to my community and province by helping these kids get to the next level. Being from such a small place, like the Eastern Shore, it’s hard to get your name out there. I just want to develop their skills and help them achieve whatever they set their minds to.” (See "Hannah Kent Is Up for the Challenge" for a 2017 story about Kent's decision to attend Kent Prep School.)