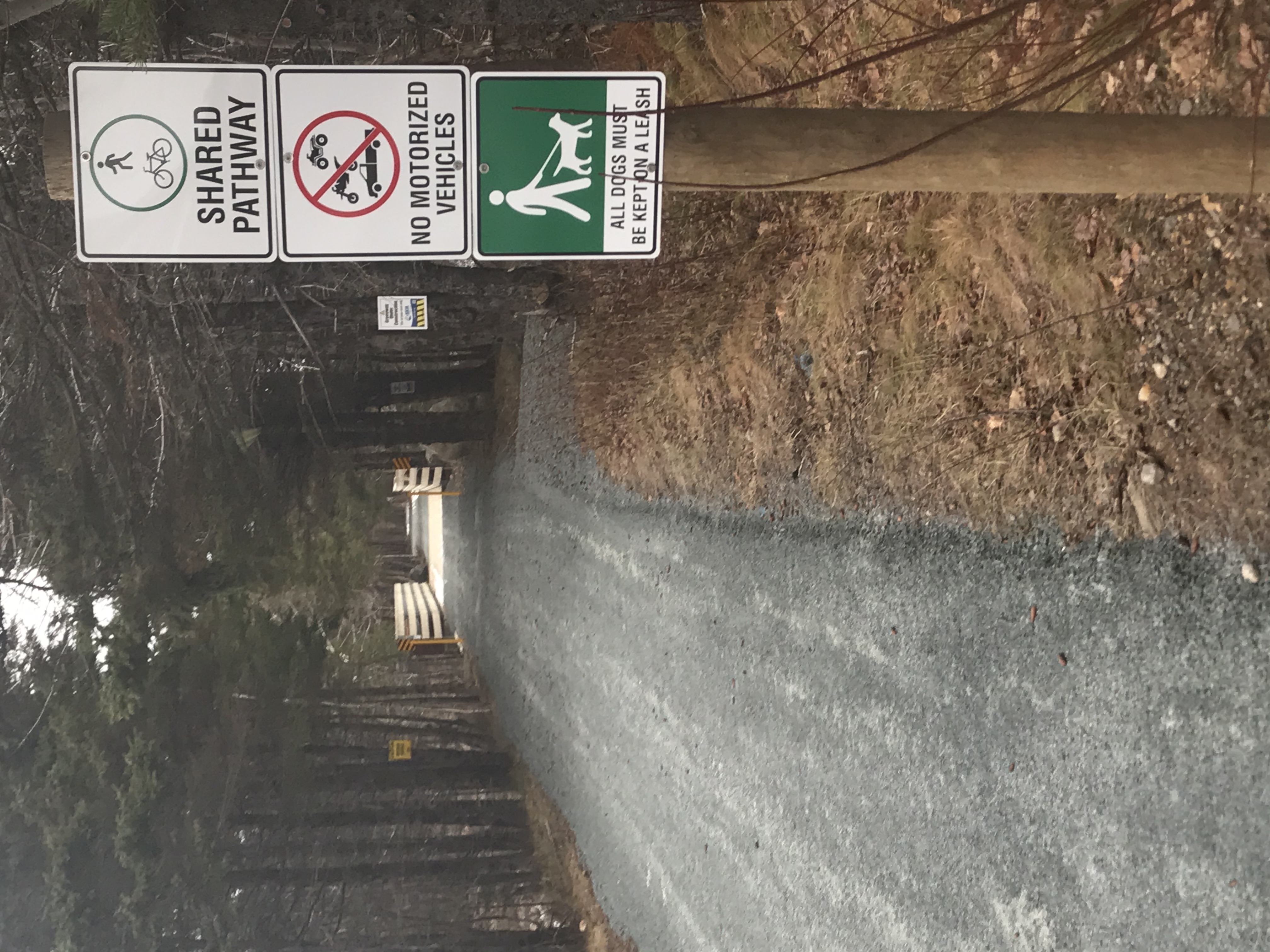 [Note: If this image is on its side, our editor is wrestling with a software program to give this photo a turn. It won't turn, and it won't go away either.   We're waiting for a call from our vendor. In the meantime, we apologize for the inconvenience.]

The Gaetz Brook Greenway moved a step closer to opening this spring as an Active Transportation trail with Lands and Forest Minister Iain Rankin’s December 19, 2019 Letter of Restriction to the SATA Trails Society.

This Letter of Restriction confirms the commitment of the Ministry to keeping most motorized vehicles off the trail:

“Prohibited Activities: At no time shall anyone operate a motorized mode of transportation. For clarification, this includes the operation or use of any motorcycles, dirt bikes, all-terrain vehicles, snowmobiles, amphibious vehicles, automobiles, trucks or sport utility vehicles. It does not exclude the use of a motorized wheelchair or scooter that is being used by an individual with mobility requirements.”

Rankin’s letter has provoked a vigorous response on social media from people who have been arguing for opening the trail to motorized vehicles, including calls for acts of civil disobedience, political retaliation at the next election, or the physical destruction of any barriers to ATV usage. In addition, District 2 HRM City Councillor David Hendsbee emailed an impassioned letter to Minister Rankin on December 27, 2019 calling on the Minister to overturn Rankin's own Letter of Restriction and substitute instead a seasonal-based system.

Under provincial law, community groups go through an elaborate 10-step process to persuade Lands and Forests to turn over portions of Crown land for use as trails. As it happened, SATA Trails and the Marine Riders both put in applications for a Letter of Authority (LOA) to develop and run the Gaetz Brook Greenway, the former asking for a non-motorized trail, and the latter for a motorized trail.

Lands and Forests (then the Department of Natural Resources) and the Department of Communities, Culture, and Heritage, set up an “interdepartmental working group” to oversee a public consultation process led by PONO Consultants International. According to the summary DNR report on this consultation, dated December 20, 2016, under “What We Heard,” DNR said, “Participants in this process felt strongly that there are safety issues having motorized vehicles on this trail…. It was also clear that all participants shared concerns associated with allowing motorized use as, in their perspectives, this would pose safety issues to walkers, runners, hikers, cyclists and pets.”

Since that time, SATA Trails has overseen roughly $1,000,000 worth of construction to bring the trail and its associated bridges up to standard. Most of this money has gone to construction firms based on the Eastern Shore. And almost none of these funds would have been available to build a motorized trail because the funders do not fund motorized trails.

Opponents of a non-motorized trail were slow to get organized, but have built up a strong presence on social media, primarily through the work of a new society, NSSOTA (Nova Scotia Share Our Trails Association.) Mark Power, one of the founders, recently asked on Facebook for people to weigh in as to whether they favoured some kind of rally or protest, and if they would show up.

On the legislative side, Power says the group wants “the provincial government to make a simple and fair change to the Crown Lands Act. It would have to state that all rural crown owned rail corridors (provincially) have universal access to all user groups.”

Other individuals posting on NSSOTA’s Facebook page are interested in more immediate and direct steps, starting with simply ignoring the posted signs banning motorized vehicles: “I’m driving on those trails no matter what they try and do;” “We will use it even if it’s closed;” “Isn’t going to stop me!” Some commenters call for various acts of civil disobedience.

And there are repeated suggestions to destroy the gates and break the locks: “They’re going to be pissed when I take my chainsaw for a walk;” “nothing a good rezip saw cant fix….just sayin;” “Back where I come from them gates would be gone by morning lol;” “Locks can be cut gates can be broken.” [Note: all of these comments were visible on December 27, 2019.]

One of the first gates up has already been damaged, and SATA Trails has reported the damage to the RCMP, who are responsible for enforcing the regulations on trail use.

In his December 27 letter to Minister Rankin, District 2 Councillor David Hendsbee points out that since the trail is now ready, and “the winter frost has frozen the ground into a solid surface….I am asking you to consider lifting the Restriction on the Trail and unlock the gates and permit full access by all various users for the winter months. As long as the ground is frozen, any potential damage should be kept to a minimum. Once the Spring thaw occurs, then apply the Restricted Access code until the moisture and soft ground abates.”

Hendsbee pulls no punches about the intensity of his commitment to opening the trail to motorized vehicles: “I beseech that you consider this request and have the Gaetz Brook Greenway open for the winter season as a demonstration project.”

The trail should be fully operational this spring, once Lands and Forests goes through its final approval process for the construction work—assuming that Rankin decides to stick with his department’s approval of a non-motorized trail.